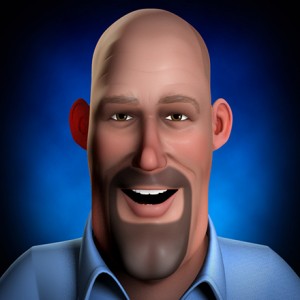 Although I started out as an art director and then graphic designer, I switched to 3D illustration and animation full-time in 2003.  I started out in an application called StrataVision, but in 2005 I made the change to AutoDesk Maya.

Since then I have been exclusively involved in 3D illustration and animation.  In 2009, 3D Artist Magazine, published in Great Britain, selected my illustration “Tot Rod” for a tutorial in their inaugural issue.  For the next three years I wrote a monthly column in their Q&A section entitled “Maya: General.”  I also created two additional tutorials for them; one on building a photorealistic Chevrolet Camaro and one on the creation of the “Tower Station,” in image of a 1930’s-era gas station built on old Route 66.

As a 3D generalist, I am proficient in modeling, texturing, shading networks, animation, lighting, dynamics (particle systems and dynamic fluids, cloth and hair), rendering and compositing.  Although AutoDesk Maya is my primary software, I also use Modo for modeling, Photoshop and AfterEffects for compositing, ZBrush for sculpting, Vue for environments, Filter Forge and Quixel (both Photoshop plugins) for building textures, UVLayout for mapping UVs, as well as several other small applications for additional workflows.